Heat pumps
It allows to provide both heat for heating and cooling. Although powered by electricity or gas, these machines use renewable energy, because the transfer of heat from an external source, the “cold source”, to a “hot source.” It uses free energy, ecological, renewable, water and air. The heat pumps are the ideal solution to reduce energy consumption and CO2. 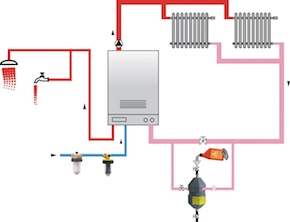 Cogeneration and District Heating
Cogeneration is a combined system that simultaneously produces electricity and heat. This technology produces electricity and simultaneously recovers the thermal energy that is generated during the thermodynamic process. The combined production of electrical and thermal energy thus allows a lower fuel consumption, optimizing the exploitation of the freed-up resources. District heating consist in transport of heat that is produced in excess from the cogeneration process, in other places that require the need.

Geothermal
With geothermal energy, taking advantage of the natural heat of the earth, each place can warm up and raffrescarsi. Generated by geological sources of heat and can be considered a form of alternative and renewable energy. The great advantage derives from the fact that a geothermal system encloses in a single plant the same functions normally entrusted to two different devices, such as boilers and air conditioners.
A geothermal system, if appropriately dimensioned, is able to heat and cool a building without the aid of other equipment.

Solar thermal
solar thermal systems are devices that allow to capture solar energy, store it, and use it in various ways, in particular for the purpose of hot water supply in replacement of boilers fired by natural gas. The solar panel “thermal” is the basic device on which this technology is based.

Condensing boiler
The condensing boiler, is able to obtain a 90% higher thermodynamic efficiency of the fuel used, thanks to the latent heat recovery of condensation of water vapor contained in the combustion fumes.
The recovery of this heat, is obtained, condensing the vapor in question, which passing to the liquid state, releases heat, that is “captured” by the boiler exchanger. All the heat thus recovered is converted into greater energy efficiency which in turn translates into a considerable saving.

Boilers and pellet stoves
The pellet boiler is particularly suitable for buildings with central heating or detached houses. E ‘is equipped with its own tank whose capacity is normally around per quintal and a half, so it is able during the winter periods to maintain the charge for at least a week. In summer, when the boiler runs only for domestic hot water, the charge lasts obviously much more, even an entire season.
They are also on the market different types of pellet stoves, vary in size and design. There are also hydro stoves, that can be connected to the heating hydraulic system of the house and, can be able to produce hot water, that circulates inside the radiators.
The Pellet stove can also be placed in service apartments, but it needs for a proper exhaust.

Radiant heating floor with water system
The installation of these systems is invisible, the system does not generate dust and so is the heating system more suitable for allergy sufferers. With the installation on the floor, each square meter of your home can be used to heat rooms and create a healthy living environment. E ‘can use different heat sources, but the building will improve its efficiency with renewable energy sources.